There are many applications for TE modules connected with arising of strong thermo-mechanical stresses which can destroy junctions between dices and copper pads. Among such applications are generating modules working in big temperature differences.

But especially the solution of problem directed onto reduction of such stresses is important for PCR-machines (another name DNA amplificators) which work in strong cycling operation mode. The requirement of PCR-machine makers to increase cooling/heating capacity with goal to increase temperature ramping can be solved by reducing of dice height only. But the value of mechanical stresses is reverse proportional to dice height, so this requirement is in contradiction with module and PCR-machine lifetime.

The works on improvement of cycling reliability has been started by SCTB Nord (patent Russian Federation #6470 dated 11.09.1997, patent of China #ZL99 2 064058 dated 05.04.1999) via introduction of elastic glue in junction between commutation copper pads and ceramic substrates.

This technology has received wide application and now practically all TEC makers fabricate glued modules and not only for PCR-machines. The variant with application of glue layer at cooling side of module (so-called M-version) provided the increasing of cycling reliability at 3 times. The variant with application of glue layer at both sides of module (so-called MM-version) provided the increasing of reliability at about 3 times additionally. But glue layer at hot side (heat sink side) reduces efficiency of modules because heat flux through hot side is about 3 times more than through cold side. And this disadvantage was solved by another approach.

Next step in reduction of thermo-mechanical stresses was realized by introduction of thick metal layers with good plastic properties deposited onto ends of dices by sputtering (so-called H-version). Such technology patented by Technological Bureau Nord gives possibility to avoid the problem with low thermal conductivity of rubber glues. Optimal design of modules working in hard thermo-mechanical stresses is the combination of glue layer at cold side and plastic metal layer at both sides (so-called MH-version).

The comparison of cycling reliability for version M, MM and MH is shown in Fig.

​​​​​​​Technological Bureau Nord owns by all these technologies and would be pleased to propose our products to our Customers. 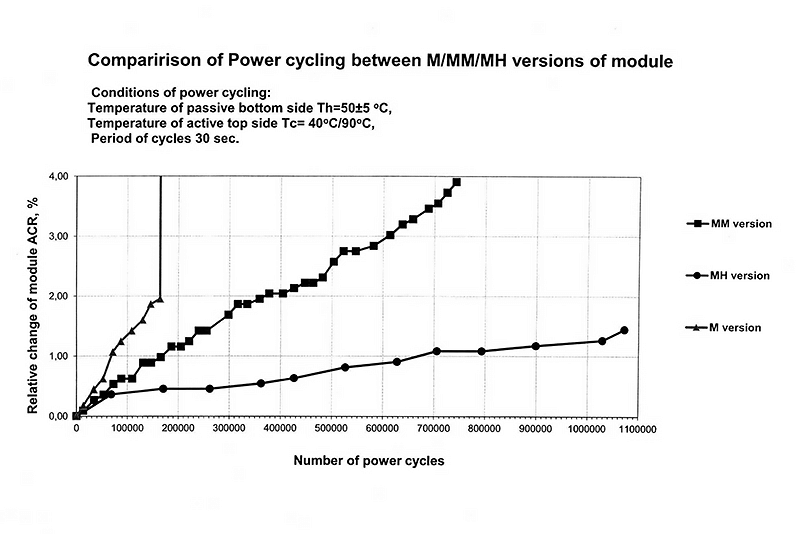