​​​​​​​Corrosion protection
​​​​​​​One of the biggest problem of limiting cooling module lifetime is corrosion of junctions between dices and copper pads. Modules working below dew point temperature demonstrate corrosion phenomena due to condensation of water vapor from ambient air. Unfortunately, protection of module by silicon sealant around module perimeter widely applied by practically all companies cannot be considered as reliable method. Such modules have rate of failure about 1-2% after six months of operating due to penetration of water vapor through silicon rubber.
Technological Bureau Nord proposes new, patented (2013 year) in many countries (Russian Federation, USA, China, South Korea) technology for corrosion protection based on covering of all electrically conductive parts in module by layer of high temperature polymer deposited by electrolytic (galvanic) method. Due to thin layer (20 microns) of epoxy polymer the reduction of module efficiency is 1-1.5% only. Besides, the technology ensures uniformly thick non-porous flexible coating in inner sections, on corners and edges of dices and cooper pads with good thermal resistance (up to 300 degrees Celsius).

The best way for application of such protection is in combination of coating with silicon sealing around module perimeter because sealant additionally reduces exchange of air between inside and outside of module.

The comparison of degradation rate for modules protected by sealant (S-version) and by combination of coating plus sealant (CS-version) is represented in Fig. 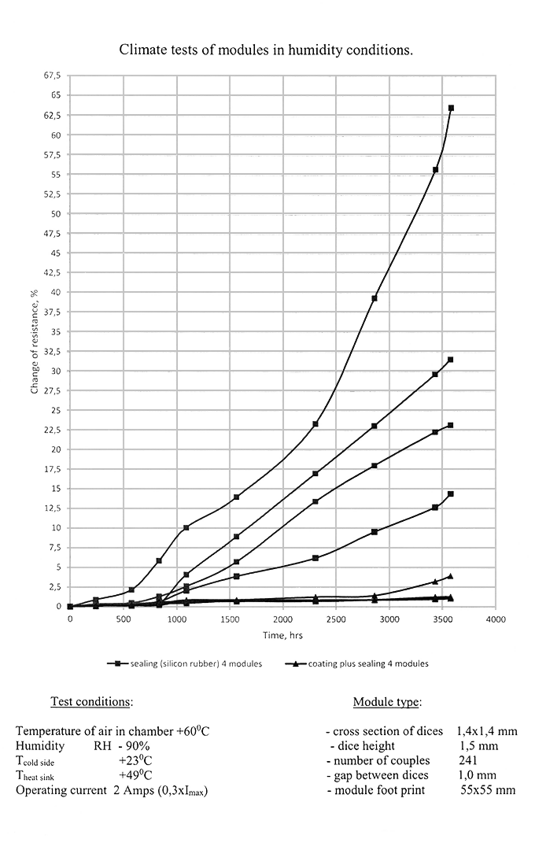